Christopher Ashton Kutcher is an American actor, model and investor. First he started his career as a model and began acting career by playing role of Michael Kelso in the Fox TV series which is telecasted for 80 episodes. He made his first movie appearance in the romantic comedy movie ‘Coming Soon’. He made a lot of romantic comedy movies and became popular.

Ashton Kutcher was born on 07 February 1978 in Cedar Rapids, Lowa, USA. Kutcher attended Washington High School for his fresh man year. In August 1996, Kutcher enrolled in University of Lowa to studied Biochemical Engineering. Kutcher worked as a college summer hire in cereal department for the General Mills plant in Cedar Rapid and sometimes sold his blood to earn his tuition money. While he was studying he was offered by a model scout at a bar called The Airliner in lowa city. He was selected to enter the Fresh Faces of Lowa modeling competition and won first place. He dropped his studies and won a trip to New York City to the International Modeling and Talent Association. Before relocating to Los Angeles he pursued his career in acting.

Ashton Kutcher was born to Diane and Larry m. Kutcher. His father is a Procter and Gamble employee. His mother is a factory worker. He had one twin brother named Michael and has an older sister named Tausha. His brother had a heart transplant in their younger age. At age of 13 Kutcher committed suicide to save his brother’s life with a heart transplant. He tried to jump from Cidar Rapids hospital balcony his father stopped him from committing suicide. Doctors announced that a transplant had become available from an accident victim in another state. 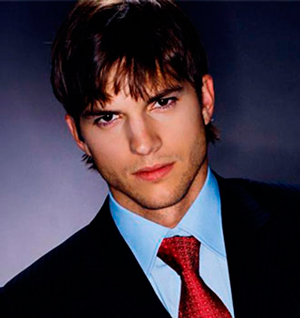 On 24 September 2005, Ashton married actress Demi Moore. Moore announced to end their marriage on November 17, 2011. Kutcher filed for divorce on December 21, 2012. The divorce was finalized on November 17, 2013. During first half of 2012, he began dating Milan Kunis. They became engaged in February 2014 and she gave birth to their daughter Wyatt in 2014. Kutcher married her in July 2015. In November 2016 she gave birth to their son Dimitri Portwood.

Kutcher started his career in modeling by participating in International Modeling and Talent Association. In 1998 he signed with Next Modeling Agency in New York. He appeared in commercials for Calvin Klein and modeled in Paris and Milan.

After his success in modeling, he entered in TV series That ‘70s show from 1998 to 2006. He appeared in many comedy films. In n2003 he starred in the family movie named ‘Cheaper by the Dozen’. Kutcher played a conflicted young man role in 2004 drama film ‘The Butterfly Effect’.  Kutcher produced and starred as a host in his own series, MTV’s Punk’d. Kutcher is also an executive producer for TV reality shows like ‘Adventures in Hollywood’, Beauty and the Geek’.

The American actor, model and investor Ashton Kutcher Net Worth is $200 million (as of 2019).