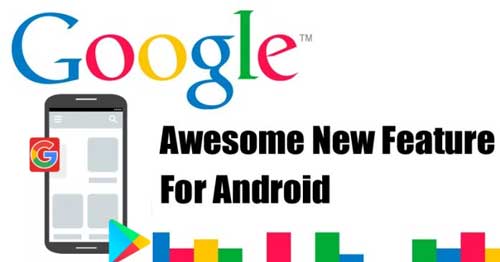 There are many platforms of smartphone like iOS, Android and Windows. Out of these Android is the best OS used by many of us. The Android OS is best because of its easy use and cool interface. Nowadays many are using their smart phones to perform any task. With the emerge of smart phones the implement of any task has became so easy. There is no one who doesn’t have smart phone. You can carry it with you to anywhere.

With the help of smart phones any one can pay something. But while paying through your smart phone or tablet sometimes you might get frustrated to checkout. To pay online we need to go through the number of forms and we end up with an error or session timed out.

To overcome this problem, Google has announced awesome feature to speed up the digital payment process. The new feature of Google is “Pay with Google”, this allow users directly pay using their saved credit/debit card.

The users of android and chrome can chose to pay using their saved debit and credit cards from their Google account which have been already added to Google Play, Chrome, Android Pay or YouTube. You just need to select your saved cards and need to enter the security code to send payments.

The tech giant Google will automatically collect and sent the payment and address details to the merchant from users’ account and skips the additional information from the users.

According to Google, this new feature will help users to save their precious time to skip on filling multiple forms required in the payment process. But this new feature of Google can be used at selected places in the US. Few companies like Spot Hero, Doordash, Instacard and many others supports pay with Google Feature.

One more thing that Google had announced is that they will not charge any transaction fee for using this service. Up to now it is not known that whether the “Pay with Google” feature will be announced in India or not.

So, this is all about awesome feature released by Google. If you have any queries regarding this post please comment below. Visit our site for more recent updates.